Adam Fetter has been captivated with fitness from a young age. Growing up in the Chicago area, he remembers performing bodyweight circuits of pullups and pushups with his brothers in the bedroom before going to bed. At this time fitness was a means to performing better on the soccer field; little did he know this would be the beginning of a lifetime pursuit of physical and personal development. 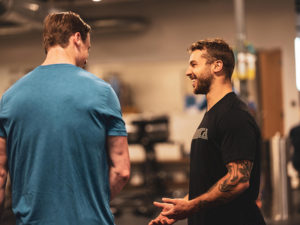 Soccer was Adam’s primary focus in his pre-university years. The majority of time not spent in school was devoted to playing soccer, leading to an invitation to play for the Chicago Fire Academy (a part of Major League Soccer’s Youth Development Program). During this time he was stricken with several injuries that led to reconstructive surgery, including a pelvis fracture and torn ACL. Adam recovered well from these injuries, but turned down a college soccer career in order to pursue a career in physical therapy.

The first step to obtaining a Doctorate in Physical Therapy required a Bachelor’s Degree in Exercise Science. During his studies, Adam worked with Saint Louis University Division I Athletics. As a student assistant strength and conditioning coach, he primarily worked with athletes in soccer, basketball, volleyball, and swimming. After experiencing his first official job in fitness, he wanted more.

While still an undergraduate student, Adam found a job at The Lab Gym in Saint Louis. Owned by the late Justin Thacker, Adam had the opportunity to learn under him for several years. While at The Lab, Adam worked as a sports performance coach, CrossFit coach, and personal trainer. While not in the classroom, Adam could be found at The Lab trying to absorb as much knowledge as possible or training his ass off as a competitive Olympic weightlifter and CrossFit athlete. This time at The Lab Gym was a huge step forward in helping Adam develop his philosophy of health and wellness, along with learning how to help others with their personal pursuits of fitness.

Following the completion of his Doctorate in Physical Therapy, Adam took a physical therapy position in San Francisco with EXOS. EXOS is a company focused on human performance by addressing four pillars of health, including mindset, nutrition, movement, and recovery. During his time in San Francisco, he did not want to lose touch with the fitness industry. This led Adam to additionally take a position working for Marcus Filly, the founder of Functional Bodybuilding. Under Marcus’s wing, Adam learned and lived the Functional BodyBuilding lifestyle of “Look Good and Move Well.”

After only a year in San Francisco, Adam moved to Austin, Texas, to be closer to his future wife, Madeleine. In Austin, Adam continued to work for EXOS at the local clinic. During this span of time at EXOS, Adam had the opportunity to rehabilitate and optimize movement patterns with professional athletes from the NFL, NBA, MLB, and UFC, as well as several collegiate athletes. To continue to stay fresh in the fitness realm, Adam started coaching clients under his own personal remote coaching business.

Adam had a great career ahead of him, but he was disenchanted with the field of physical therapy. Physical therapy primarily focuses on movement, and he knew this was only one aspect that needs to be addressed in order to optimize the human experience. Adam saw the alignment of his personal beliefs of health and wellness and the platform that Functional Bodybuilding and Revival Strength created to help individuals on their fitness journey. In his new career he has aspirations of helping individuals in profound ways by addressing ALL aspects of the human experience.

BOOK A FREE CONSULTATION WITH ADAM