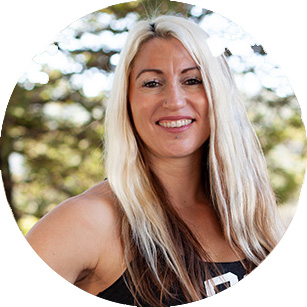 Shanna Guzman swam for the Terrapin Swim Team in Concord as an age group swimmer and through high school. She went on to compete for Southern Methodist University and later transferred to University of San Diego and finished her college swimming. Post college she competed in olympic distance Triathlon, Master’s Swimming for The Olympic Club, and competed in marathons. As a Master’s swimmer she won a world Championship in the 200m Back in 2006 and multiple national titles from 2006-2012.  She also qualified and ran in the Boston Marathon in 2013. In 2016 she started her journey as a Master’s athlete in CrossFit.

Shanna’s background in coaching fitness stems back to 2004 when she first got her NASM Personal Trainer Certification. In Santa Cruz, she began coaching through personal training and group fitness classes at Optimal Health and Fitness.  At that time she coached age group swimming for Santa Cruz County Aquatics and Masters Swimming at Simpkins Swim Center. In 2010, she made her move to San Francisco and continued her personal training and coaching at Breakaway Performance. She soon came across the sport of fitness at TJs Gym in Mill Valley and had started to implement CrossFit for her own training in endurance sports. In 2012, she began her career as a coach in the sport of fitness. She continues to do personal training and individual program design for athletes that have a variety of goals, including competitive CrossFit. She is currently enrolled in the OPEX Coaches Certification Program where she gains new perspectives on program design, nutrition, and lifestyle.

The sessions kept my motivation sparked and I never lost it...even when I was training in a small box room with a few kettlebells I felt challenged and every session was worthwhile!
Thank you again for all the early morning consultations and being an amazing coach. I really can’t write enough of the amazing impact you have had on me.
Previous
Next

BOOK A FREE CONSULTATION WITH SHANNA